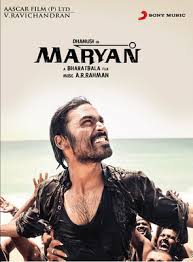 Well, this was one movie which revolved around the hype of having 2 national award winning actors, music from the gifted Oscar and  a lot of other buzz.

Did it live up to the expectations?

Not an utter flop. Dhanush’s performance shall be remembered.

Since being a half baked, I did not get the intricacies of the language that took me to like the movie during the first half and went against in the second half. The language was gauging my patience of not following the colloquial Tamil slang.

Dhanush’s title role was at his best of splendor. The actor has yet again proved his mettle and talent, worthy enough for the son-in-law of the superstar himself.  Supported well to add to the charm was Parvathy Menon. This actress was all around to woo Maryan in the 1st half and wail all around and portray telepathic contact with ‘her’ Maryan in the latter half.

The support cast did their parts well especially the guys who played Sakkarai and Swami. They handled comedy effortlessly throughout. Salim Kumar was hardly seen on screen. Vinayakan, the baddie looked funnily disastrous on screen owing to his comical memories from the Malayalam movies. Dhanush’s mother’s sooty covered performance deserved applause despite limited screen presence.

The ARR music magic was a fusion of melancholy trance and a frenzy wave of tides. Coupling with the pensive BGM, it beheld unparalleled beauty to soothe the ears.

The camera captured every frame and angle with utmost precision and was a feast for the eyes.

Editing was a decent effort. At a few instances, the story hardly made sense to the succeeding and preceding scenes (thanks to the language intense dialogues)

Verdict: Personal choice- A disastrous must-watch if you want to catch an eye over the acting prowess of Dhanush. It was a rickety roller coaster ride that could have been a well rounded package if the knots were braided properly.