Skip to content
I have often been enthused by the idea of being the topper in class.

Well, my mom, too must have had the same feeling.

That feeling in her kept me at the top till my 5th standard.

But then, things began to go out of her hand.

And marks went out of mine.

I have had the privilege to touch the ocean bed once. And mind it, it sucks. All alone in the vast expanse of darkness. Never want to cast a glance again. Crossed fingers got intertwined!

As graduation graduated to a phase called post graduation, I was barely hanging on the shaky branch called 3 point CGPA.

And yes, I wanted to be a topper there too. I had made up my mind to do it in the beginning, as always. But, as always, my mind deviated to the actual calling, to do what I was good at- being idle.

There was this lady, the descendant of the zinc baron, all set to the strings into her course of action and was of course beyond ‘question’.

Also a lady whose name followed the 1st avatar of Vishnu kept that tag ‘topper’ forbidden to others.

The third lady, who is to finance as Prof Minerva McGonagall is to Transfiguration, sealed the fate.

Guys, shame on you.

I was caught busy striving to seal the shakiness of the branch. Hence couldn’t pick on the mocking and stayed put.

The weight on the branch was shaking down those who had a less tighter grip on them.

We, the MBAs from a premier B-school, who believe that we are God’s gift to mankind and bear a diadem encrusted with gems dazzling with innate braininess, often use 2*2 matrices to work out on the aspects of management.

After hours of futile thoughts and bizarre streaks of imagination,
After many cups of coffee and midnight oil burning,
After going through hundreds, no, thousands of research papers,
I have come up with a theory that could set the earth off its course.

A path breaking invention, the brain child of a thought leader designed to classify parameters that could make or break the formation of the future – a blessing to the mankind in disguise.

I present before you, a 2*2 matrix, one of its kind- for you, for the future CEOs. 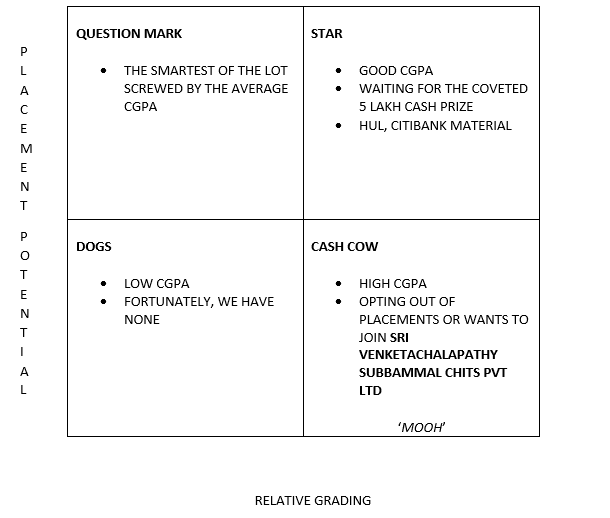 Did you mean to say that some teeny-weeny company called Boston Consulting Group has already come up with this? Is it? For corporations, that too to analyze their business lines.